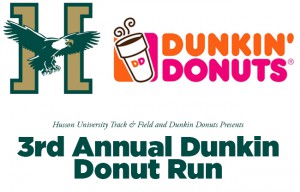 On Sunday, April 10th it will be “time to make the donuts” to support the local community. Proceeds from the third annual Dunkin’ Donut Run will benefit Husson’s Track and Field Team and a charity in the Bangor area.          Photo Courtesy: athletics.husson.edu

BANGOR – The Husson University Track and Field Team is preparing to host the school’s third annual Dunkin’ Donut run on Sunday, April 10th. A race that allows participants to help a good cause while taking a bite from a tasty treat.

The event kicks off at 9:00 a.m. with the Munchkin Mile, a sprint designed for kids age 13 and under. Youth runners will race one mile before enjoying a bag of munchkins. For older runners, one mile is only the beginning.

Competitors 14 and up will partake in the two-mile Donut Run. Runners take their starting positions at 9:30 a.m. following the conclusion of the Munchkin Mile. In the spectacle’s second race, participants will be put to the test both physically and mentally. Especially, for those seeking a first place finish.

Entrants will begin by running one mile before taking a donut break at the halfway point where they will consume two donuts and then proceed to run one more mile. Runners will have to make the conscious decision of whether or not to wolf down the delicate pastries in an effort to be crowned champion.

Devouring donuts too fast can create an upset stomach leading to an unplanned pit stop. However, savor the donuts and the competition is already one step closer to the finish line. Runners will need to find a balance between the two eating styles if they want to come in first.

Winning aside, the event poses a great opportunity for participants to exercise and interact with one another.

Entry fee for the Munchkin Mile is ten dollars and race T-shirts will be given to the first 60 registrants. Race-day registration begins at 7:30 a.m.

The Donut Run has a three-tier pricing system. The race is ten dollars for high school and college students that are pre-registered by April 8th. $15 dollars for community members pre-registered by April 8th or $20 on the day of the race. The first 50 registrants will receive a Husson T-shirt. Race-day registration for the Donut Run also begins at 7:30 a.m.

Event organizer and head of the Husson Track and Field Team, Kate Goupee says the funds will support the local community.

For more information about the races or to fill out a registration form, visit the event page online or stop by the Track and Field office at Newman Gymnasium.

Whether you’re a runner by nature, food connoisseur, or just looking for an inviting way to get some exercise, this is one race that you donut want to miss.