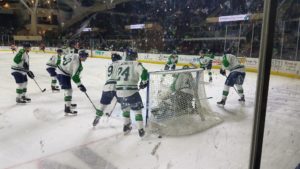 PORTLAND, Maine – The Maine Mariners will welcome the Stanley Cup to the Cross Insurance Arena on Friday, March 8th prior to the Mariners hosting the South Carolina Stingrays at 7:15 p.m.

The Stanley Cup will be placed in the C.N. Brown area which is located in the concourse above the entryway at the corner of Spring and Center Streets. Fans with full-or half-season ticket memberships will be allowed into the arena at 4:30 p.m. while fans with general admission tickets will begin at 6 p.m. Fans must bring their own type of camera with no expanded lenses and only one photo per fan will be allowed. A member of the Mariners promo team will be on hand to assist with the photos. The game is played on a Friday night which means until the start of the second period; the concessions stand will be selling $1 hot dogs, $2 popcorn, and $3 Bud Light

The game versus the Stingrays will mark a mini-two game set with the team from South Carolina as the Stingrays will begin a four-game road trip will which finish up with stops at Worcester, MA and in Atlanta, GA. For the Mariners, it will be the second game of a three-game homestand.

The Mariners have done many things to help grow the sport of hockey to the southern Maine community as well as right here at Husson.

Students in the New England School of Communication’s journalism programs attended a game at the beginning of the month and got to experience the behind the scene work of the people who work at the Cross Insurance Arena.

Eight students and two instructors boarded a van and spent the day with the team and met the people who deal with the ticket sales as well as everybody behind promoting the team and bringing the Stanley Cup to Maine.

The biggest surprise of the trip was meeting Maine Mariners play by play announcer, Michael Keeley.

“It was eye-opening to learn how much Mr. Keeley does during the game. He does social media, updates the website, chats live with listeners (on a messaging board) on while calling the action,” said UMaine women’s hockey play by play announcer, Adam LaFleur.

Even with Husson Athletics, there is one person who does social media, one person who handles the website, while one or two people who call the game.

The Stanley Cup is one of the oldest trophies in all professional sports and it is the only trophy where the names of the winners are engraved on the trophy.

“I still remember back when the Bruins won the cup in 2011,” said lifelong NHL fan Cole Hurlbert. “Watching just about every regular season game, then every playoff game, and all the game 7’s and being able to watch the Bruins win the cup was truly special. It is so great for the state of Maine to be able to have an event with the Stanley Cup and I am sure the Cross Insurance Center will be a busy place.”

For tickets to the game go to MarniersofMaine.com