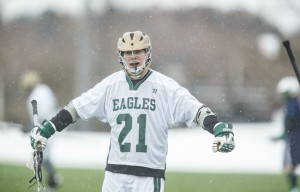 Brett Martin cheers after the Eagles net a goal. The senior midfielder earned one assist in Wednesday’s 11-2 loss to the Lasers. Image by: athletics.husson.edu

BANGOR – The Lasell Lasers (3-1) handed the Husson Eagles (0-3) their third straight loss after picking up an 11-2 victory in non-conference play on Wednesday. Led by Junior attacker Josh Gallant, the Lasers decimated the Eagles.

Lasell wrecked havoc on Husson all afternoon with an aggressive forecheck and up-tempo offense. The Lasers’ ability to pressure the ball carrier paid dividends in forcing 32 turnovers, a season high for the Eagles.

The Lasers struck first in the high-scoring affair of the stick of Anthony Saitta. After forcing back-to-back turnovers, Pat Egan advanced the ball ahead before finding Saitta for the goal. The duo gave the Lasers an early 1-0 lead, scoring 1:41 into the opening frame.

The tally marked the start of a big game for Egan. The senior captain proved his status as a veteran and leader for the team by earning six assists in the contest.

Midway through the first, Josh Gallant netted a shot for Lasell to take a 2-0 lead.

Casey Sullivan rounded out first quarter scoring with a late snipe. Sullivan rocketed a shot past Freshman goalkeeper Matt Martin to give the Lasers a 3-0 advantage with 1:41 remaining in the frame.

In the second quarter, Saitta collected a hat-trick after finding the back of the net twice. The frame’s lone scorer gave the Lasers a commanding 5-0 lead heading into halftime.

Husson managed to get on the board in the third quarter when Brooks Gay tucked a shot past Junior netminder Jorge Salazar with 5:07 left in the third. The goal appeared to revitalize the Eagles, but a last second goal would put an end to that sensation.

With 36 seconds remaining in the third, Ryan Madden buried a wrist shot to give the Lasers a 6-1 lead heading into the fourth quarter.

In the final frame of regulation, the Lasers battened down the hatches by outscoring the Eagles 5-1 to secure an 11-2 victory. Gallant upped Saitta’s hat-trick with a four goal performance, netting three points in the fourth quarter.

The Lasers controlled the ball effectively on both ends of the field. Lasell scooped up 36 ground balls and went a perfect 17-for-17 on clearing attempts.

Husson’s failure to possess the ball proved to be disastrous. Lasell put on a laser show beaming 55 shots. Martin made 22 saves, on 33 shots on net, but the overwhelming amount of chances devastated the rookie goaltender.

Martin is competing against fellow Freshman Nick Zavoronty for the starting role. Martin is 0-2 with 32 saves on 54 shots while Zavoronty is 0-1 with 16 stops on 27 attempts. Interim head coach Michael Craig says there appears to be no front-runner yet.

I had a full conversation with coach Craig on The Locker Room about how he is mentally preparing players and what is needed for Husson to secure their first conference title. In the clip listed below, Craig discusses what it’s like working with assistant head coach Mark Nardelli.

Lasell will look for their fourth consecutive win on Saturday when they travel to Southern Maine for a matchup against the unbeaten Huskies (3-0). Game-time is set for 3:00 p.m.

Husson will look to break their cold spell as the Eagles play host to Regis College (Mass.) for a contest against the Pride (3-1). Game-time is slated for 3:00 p.m.