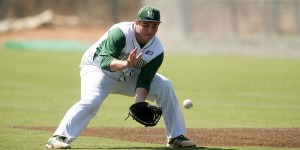 First baseman JT Whitten fields a ground ball during Thursday’s 8-2 loss to the Bowdoin College Polar Bears. The senior drove in the first run of the day for the Eagles and finished 2-for-4 at the plate. Photo Courtesy: athletics.husson.edu

BANGOR – The Husson Eagles (15-13) dropped their third game in a row after falling 8-2 in nonconference action to the Bowdoin College Polar Bears (15-10) Thursday afternoon at the Pickard Baseball Diamond. Infielders Chad Martin and Colby Joncas propelled Bowdoin to victory with a combined five hits and three runs batted in.

The Polar Bears put the first tallies on the board with a big first inning. In the opening frame, a leadoff single and an error by shortstop Mike Wong put runners on the corners with nobody out. The table was set for Martin who plated the first run of the game with an RBI double to left field. Feeling the pressure of runners on second and third, Husson starter Tommy Burns committed a balk to make it a 2-0 ballgame.

Cleanup hitter Peter Cimini drove in Martin with a sacrifice fly to left field. Burns recorded back-to-back outs before walking Sean Mullaney. With two down and a runner on first, Joncas drilled a double to right field to extend the Polar Bears’ lead to four.

Bowdoin starter Michael Staes didn’t take the four-run cushion for granted as he made quick work of Husson. Staes stifled the Eagles’ offense allowing just three hits and two walks while striking out four. The senior kept Husson scoreless for five innings before surrendering a double to JT Whitten in the sixth that would score Wong to make it (then) an 8-1 game.

Building off of their first run, the Eagles looked to continue mounting the comeback in the seventh as Ryan Dixon relieved Staes. With one out, Alex Chapman hit a ball to third that sailed away from first allowing him to reach second. Conor Maguire advanced Chapman to third with a grounder to the pitcher.

With Chapman 90-feet away from home, Cam Archer came to the dish looking for an RBI. The junior cashed in with a single to cut the deficit to six. However, the run would round the Eagles’ scoring on the afternoon. Husson failed to put up a fight in the final two innings with Bowdoin retiring the side in order each time.

The Polar Bears defeat the Eagles 8-2 as Staes picks up his third win of the season.

Tough day for Burns as he earned the loss for his six hit seven run (three earned) performance. The sophomore falls to 1-3 on the season and has now lost his last three outings.

Bowdoin, winners of their last three games, will look to keep the momentum going on Saturday as they play host to the Williams College Ephs (9-14) on Saturday. Game-times are set for 12:00 p.m. and 2:30 p.m.

Husson will look to snap their three-game skid on Saturday as they visit conference rival Castleton (20-9) for a doubleheader. Game-times are slated for 11:00 a.m. and 1:30 p.m.