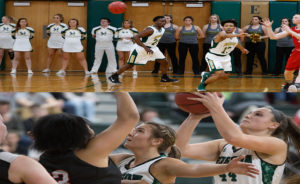 BANGOR, Maine – Both Men and Women Eagle basketball teams have won the past two North Atlantic Conference (NAC) Championships. The men have won six of nine. The women have won four of eight. This season, both of the teams are right back in the mix.

“If we were to win both, mathematically there would still be a chance you are not the number one seed, but it would seem as though we would be in really good position [to finish in first],” said Husson men’s basketball coach Warren Caruso. The number one seed hosts the NAC tournament.

The men’s team is led by former NAC player of the year and point guard Raheem Anderson. Anderson averaged 26 points a game last season. This season, that number has fallen to close to 22. “[We have had] discussions with Raheem about having more skilled players around him and the need for him to score 25 to 30 points a night was gonna be less. He has done a really good job of adapting his game to be a floor general and a scorer,” said Caruso. “Our play has improved from an overall standpoint. We are scoring more points and our field goal percentages are up.”

Freshman guard DJ Bussey is second in scoring with 13 points a game.

Last season, the Men’s basketball team lost in the first round of the NCAA tournament to #3 Babson 92-76 after winning the NAC tournament. The team trailed by one at halftime. No Husson men’s basketball team has ever won an NCAA game. Since then, the women’s field hockey and football teams won their first NCAA playoff game. The women’s basketball team completed that feat last year as well. “I don’t feel any pressure,” said Caruso. “It is a desire us to go to the NCAA’s and advance. We do talk about it.”

The Husson women’s basketball team won their first ever NCAA playoff game last year vs DeSales 74-72. The Eagles lost NAC player and defensive player of the year Chandler Guerrette along with Denae Johnson and Darla Morales. In total, they lost 34 points a game.

“We have been a little inconsistent with our young players,” said head coach Kissy Walker. The team is 11-8 and 9-3 in the NAC and in third place.

Last weekend, they won a pair of games including a 81-77 double OT thriller versus previously undefeated Caselton. At the end of regulation junior guard Joan Overman appeared to put the Eagles on top before the referees blew the whistle and called off the points.  “The words we used after the game were we battled,” said Walker. “They didn’t fold.”

The top two teams get a bye in the first round of the playoffs. The Husson women’s team trails number two Colby-Sawyer by one game. The Eagles play Colby-Sawyer this weekend. “Ultimately, at this point, that is our goal but you gotta take it one game at a time,” said Walker.

The past two years, they have hosted the NAC tournament with the men. This year they currently trail Castleton by two games for the right to host the tournament. “Playing back to back NAC championships at home with our men’s team was the best atmosphere we could have asked for,” said Walker.

It is unlikely that will be the case this year said Walker.

“It’s who comes out at the end. We have got to be playing our best ball when the playoffs are here,” said Walker.

Both teams have six games left on the season and travel to Colby-Sawyer and New England college this weekend. The NAC playoffs start on Tuesday February 20th with the 3-6 and 4-5 matchups. Those game take place at the highest seeds gym. The semi-finals take place Friday, February 23rd at the one seed’s location. The finals take place the next day.