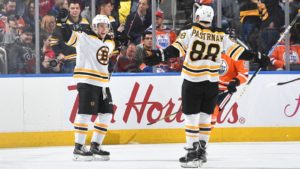 It can be defined as a lot of things. In this case, it is referencing the guts and determination or whatever it is required to go on a long run in the NHL playoffs.

On Monday afternoon, the Bruins battled for 60 minutes plus in Western Canada to come away with a hard fought victory vs the resilient Calgary Flames.

That win followed one of the roughest games of the year and a 6-1 loss to the Vancouver Canucks. The power to fight back has been shown by the Bruins all season. The B’s have not lost two regulation games in a row since November 11th and 15th losing back to back games to Toronto and Anaheim. Since then, they have won 31 out of 40.

After their hard fought win vs Calgary, the Bruins took a trip to face the disappointing Edmonton Oilers on a back-to-back. The B’s had close to double the shots as Edmonton, but goalie Cam Talbot stopped all of them as the B’s trailed 2-0 at end of 2.

The B’s could have easily folded entering the third on the second night of a back-to-back. They didn’t.  Noel Acciari got a lucky bounce on a hustle play to make it 2-1 early in third. Halfway into the period,  Riley Nash found a rebound and dished it over to Matt Grzelcyk who tied the game. Just like that, the game was tied.

The Bruins even went the extra step to avoid overtime. With just over a minute left in regulation, David Backes outwilled Oilers Drake Caggiula to get the puck behind the net to Danton Heinen. Heinen found a wide open David Krejci in the slot to net home the game winner.

Quote of the Night

“It would Have been easy for us to say three of four, back to back, maybe it is not our night, but I thought the frustration early on of not being able to finish with Talbot being real good and us not getting a lot of breaks around the net that they stuck with it.” – Head Coach Bruce Cassidy

The Bruins won another game where we wrote them off. So many times I have thought to myself, this it. This is the end of the run and the Bruins will come back to earth. It has not happened it.

After a 4-2 home loss to Buffalo, the Bruins were in New Jersey the next night. It was a 3-3 score headed into the third in a wacky one. The B’s scored twice in the third to win 5-3. The next game, the B’s are at home vs Calgary. The B’s got dominated physically in the first period and fall behind 2-1. They win. Going away. The final score was 5-2 after Backes was inserted alongside Bergeron and Marchand by head coach Bruce Cassidy.

Back in December, they knocked off Detroit thanks to a game tying goal in the final minute, and a game winning goal from Brad Marchand in OT. They played like garbage most of that game. All the way back in October they erased a 3-0 deficit to get a point vs Columbus. They won a pair of games in California that started all of this with Khudobin in net that saved their season.  Again and again, you think this team is down. They rebound.

In a playoff series, all you have to do is win four of seven games. If you refuse to lose back to back games, the chances of you moving on is high. The NHL, more than any other league, requires the intangibles the Bruins have consistently shown. With games every other day, chances of long overtime duels, and a playoff intensity unlike any other,  that certain “it” factor is required to be a champion. I don’t know exactly what it is, but I know the Bruins have got it.