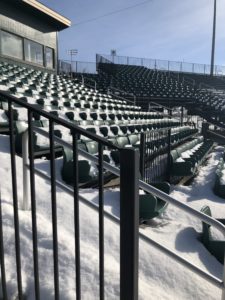 BANGOR Maine – The Husson Baseball team won three of five North Atlantic Conference (NAC) championships from 2009-2013. The Castleton Spartans have won the past four championships. This season, after a 2-6 start in Florida during spring break, the Husson baseball team looks to reclaim champion status.

“Every year our goal starts off with winning the conference Championship,” said Head Coach Jason Harvey.  “In the past, looking at the teams we have had success with this is a group that possess those qualities. We got some guys that can pitch, we got a defense that I think is going to be able to make plays consistently throughout the season. If we can string together some things offensively Ithink we will be right there for that championship.”

Last Season, Husson won the first game of the four-team NAC championship double elimination tournament. In the second game, Husson was tied with New England College(NEC) in the 8th with 1 out and a runner on third. The runner would be left stranded and NEC would score 3 in the 10th to win 8-5 and advance to the championship game. Husson would fall to Castleton in the next game and finish in third place.

“The past couple of years in the postseason championship, if we come up with some timely hits in those games it is a totally different situation. When we have that opportunity to score and come up with a big hit, we need to come up with it,” said Harvey.

In 2016, Husson lost to Castleton in the championship series. 2015 and 2014 also saw Husson come up short in the NAC tournament.

The baseball team came home from their annual Florida trip with a 2-6 record as they watched 53 runs come to the plate.The group of teams they played were very good offensively said Harvey. “The win-loss record is tough to take but at the end of the day we found what we needed to get out of that trip.”

Since coming home from the Florida trip, the team has returned to Sluggers in Brewer to practice. With the cancellation of this weekends games vs Norwich due to weather, it will be 19 games in between games if Husson can host St. Joseph’s on Wednesday.

“Being outside for a week and coming back up here and having to go back in to the gym, back into our indoor facility, Mentally it can wear on the guys,” said Harvey. “Being able to adjust on a daily basis, and making sure we get something out of every practice is important.”

A couple of Nor’easters in the past weeks along with snowy and cold conditions on Thursday and into the weekend, have postponed their schedule home openers vs Norwich on Saturday. Even without snow, the conditions will still be less than ideal as they are ever year during their first string of games in the Northeast said Harvey. When asked how the handle to conditions, Harvey said you just have to deal with it.

On the mound, another Bangor native sophomore Jesse Colford will look improve on his 2-2 freshman outing. Colford had an ERA of 3.26 last spring. He will be backed by another Bangor native Cody Collins. Collins transferred to Husson last season from D-II Arizona Christian University after playing high school ball at Bangor Christian. In 2014 Collins was a Maine high school Mr. Baseball finalist and won three state championships with Bangor Christian.  Collins pitched 4.1 innings last season before being forced to sit out due to injury.

Outfielder Stefan Strachan from the Bahamas is a freshman to keep an eye on said Harvey. “Defensively, he is as good as an outfielder we have had,” said Harvey.

If those players are to return a conference championship to Husson baseball they can not continue to miss opportunities like  last season;s blunder vs NEC said Harvey. “Those timely hits are very important when it comes to winning conference championships. When you put yourself in that position to score, you got to do it. [When] you get to that point, you can not allow good teams off the hook. You gotta capitalize on those opportunities.”