With seven games left in the regular season, the Boston Bruins will have a chance to claim first place on the Eastern Conference on Thursday night. Yes, I said that right. With a regulation win versus Tampa the Bruins will lead the Eastern conference.

Thursday’s game at the TD Garden will undoubtedly bring a playoff atmosphere to the Garden. Other late season games have gotten loud, but on Thursday things will be a little different. Playoff-like may be an understatement. I am expecting an electric atmosphere with a Bruins fan base who that has returned from 2014 when they won the Presidents trophy.

The game has a lot of meaning to. It is not just a game between two rivals late on the season. NHL teams play out of their division during the playoffs, so it is very likely the Bruins and Lightning will meet in the second round of the playoffs. Home-ice advantage, specifically for a possible game 7, is at stake.

Home-ice can be a little bit overrated in the NHL playoffs, but it is proven to be useful in game 7 matchups. Home teams are 103-73 all time in game sevens in the NHL. The Bruins are 12-8 in game sevens at home, and are just 1-4 in away game sevens. Their one game 7 road win came in 2011 in Vancouver to win the Stanley Cup.

For the Bruins, who sit one point below Tampa with a game in hand, getting home-ice in that series could very easily be the difference. The Bruins play Tampa one more time after Thursday in the regular season and are 2-0 against them this season.

The team who wins the Eastern conference will also have an easier road to that 2nd round series. With Toronto virtually locked into 3rd place in the Atlantic, the 2nd place team would have to play the Leafs. Toronto is tied for 3rd in the East with Washington. The team who finishes in first would get to play the 2nd wild card team. Currently, that belongs to New Jersey but Columbus, Philadelphia and (gasp) Pittsburgh are all within 4 points battling for position within the Metro. 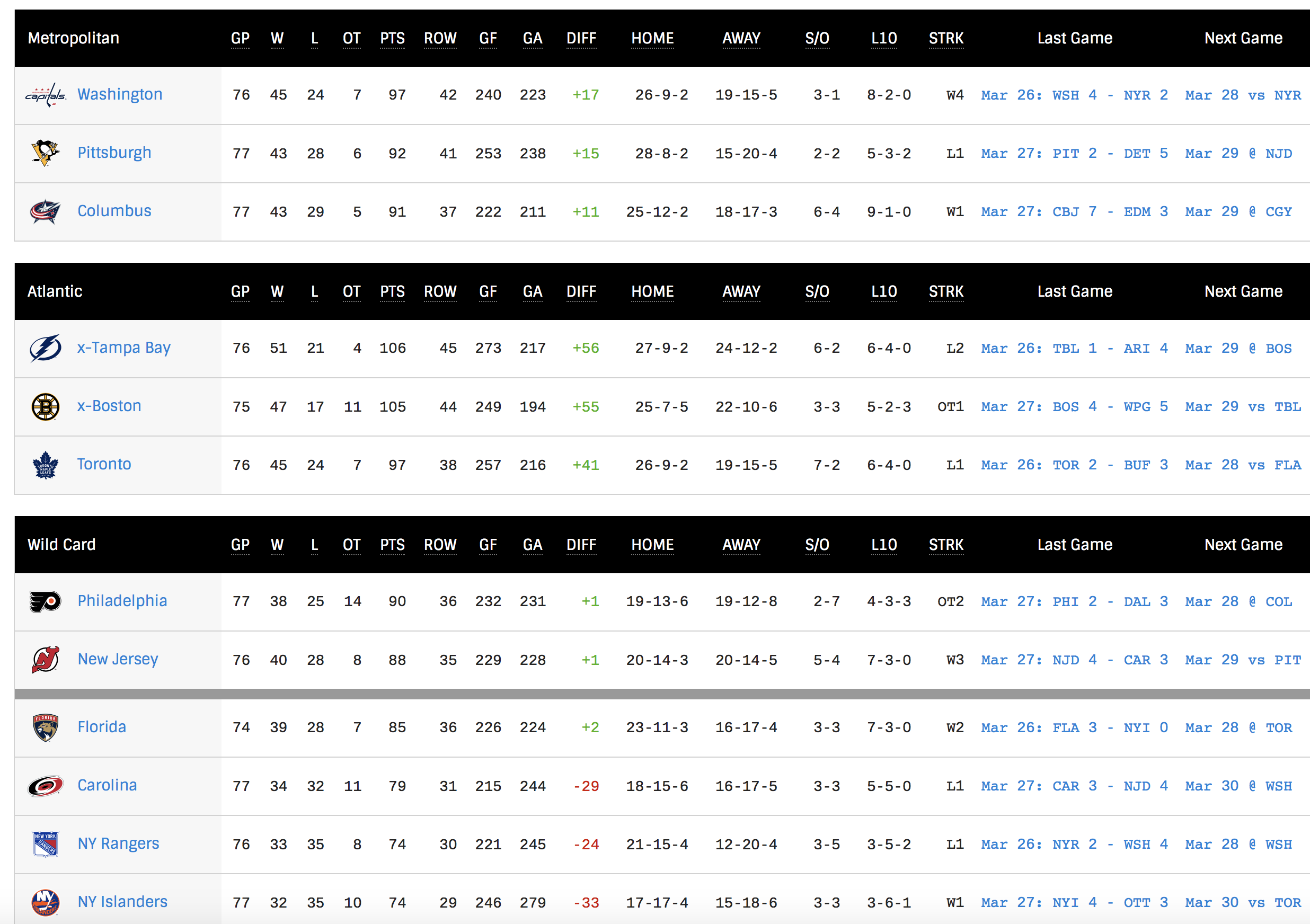 Florida sits 3 points below New Jersey in the wild card.

The Bruins have gone 1-3 vs Toronto and are 1-8 against them in their last 9 games. They have defensive and goalie questions, but that record is terrifying. Obviously, it would be better to be matched up against any of the those metro teams besides Pittsburgh (who sits the farthest away at 4 points). The Bruins won all four matchups this year versus the metro teams and have three games still left with Florida.

It is hard to imagine where the Bruins were coming into the season. A borderline playoff team with lots of unknowns. Now they sit a win away from becoming the top in the East. Last year we were praying they would get into the playoffs, now we are picking and choosing the matchups we want. . Enjoy the sox season opener (1/162) in the afternoon, but you better be ready for some intense playoff hockey in the night. It’s playoff season!!