BANGOR, ME – Spring break is over and the snow is starting to melt, which means it’s time for baseball. The Husson Eagles return home after playing 15 straight road games. They went 7-8 on this big road trip. Playing in Florida, Connecticut, and Massachusetts allows the team to get ample practice before heading home. 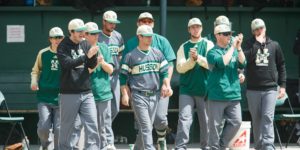 Harvey enters his 12th season as head coach of Husson’s Baseball Team. He played baseball during his college career at Husson University. Now, he’s following his passion to coach the Eagles.

“I love Husson, I was recruited to go here after a year at Maine. Also, I think that Husson is a great place for student-athletes and students in general to get a good education,” Harvey said.

Last season didn’t go as planned for the ballclub. They finished the year 14-22 and missed the playoffs. After a disappointing 2018 season, Harvey is excited to get back on the field and return to their winning ways.

During this offseason, the players worked on strength and conditioning in the weight room. They looked to be in great shape heading into 2019.

Each year is different, but Harvey notices something unique about this year’s team.

“With this group in particular, the work ethic they bring day in and day out is by far the best that we’ve had in a long time,” Harvey said.

The team welcomed junior, David LeBlanc from Beaumont, Alberta and freshman, Ethan Stoddard who transferred from UMaine. As the Eagles continue to bring in new players, they will also have to say good-bye to the seniors after this year. 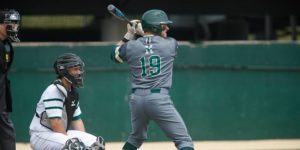 Being left-handed, Chapman appreciates playing first base for the Eagles on a regular basis.

“First base is fun because you’re in about every play and you have the ability to bail guys out when they’re making a great play,” Chapman said.

Entering his final season, Chapman has some goals in mind besides winning the North Atlantic Conference Championship.

“Be consistent, try to be a leader on and off the field, and try to limit any down days by grinding through it and being productive,” Chapman said.

Husson hosts Saint Joseph’s College of Maine in their home opener at the Dr. John W. Winkin Sports Complex this afternoon at 4:00 p.m. This will be a rematch of last year’s contest when Saint Joe’s beat Husson 10-2 during the Eagles home opener. Could history repeat itself? Harvey doesn’t believe so because he’s confident in the talent that surrounds him.

With a NAC Championship in sight, the Eagles plan to swoop in and take out their competition.