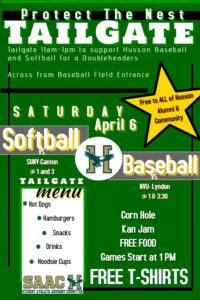 Saturday, April 6th is a big day for athletics at the campus Husson University.

The day starts at 11 a.m. as the Student-Athlete Advisory Committee (SAAC) will host a ‘Protect the Nest Tailgate.” This event is free to attend for all those in the Husson community as there will be food, t-shirts, and games including Kan Jam and Corn Hole. Food will include hot dogs, hamburgers, snacks, drinks, and hoodsie cups. The tailgate party will take place near the golf facility in the grass across the street from the Dr. John W. Winkin Sports Complex.

Both Husson softball and baseball doubleheaders start at 1 p.m. as the baseball team will host Northern Vermont University-Lyndon for the first game of a four-game series over the weekend. The baseball doubleheader at the Harold Alfond Diamond will be broadcasted by the New England School of Communication as the video production students will be doing a live broadcast.

“I think it will be a cool opportunity for everybody involved. It will let us in the sports journalism program get some hands-on experience working the T.V. equipment in a more TV centric environment, and is a good way for video students to get the experience, as well,” said Cole Hurlbert, who will be doing the color commentating for the doubleheader on Saturday.

The NESCom broadcast will aired at https://portal.stretchinternet.com/husson/. Unlike a normal broadcast of a Husson Eagles home event; there will be about seven cameras on the action instead of one camera that stays in the same place. The broadcast will also feature replay which is unlike anything on a normal livestream. There will also be a sideline reporter for the doubleheader which is something a normal Husson game would never have.

As for the on field action; Husson baseball are winners in their last four straight including a 6-5 victory over Colby College on Wednesday night in 12 innings. The baseball team is 6-1 on the homestead and will look to continue the red hot action versus a Hornets team who beat the Eagles, three of four times last season. The only win that the Eagles recorded over NVU-Lyndon was a no hitter in the Eagles’ season finale.

For the latest of the schedule and for postponements make sure to follow the Husson Eagles on social media and check hussoneagles.com