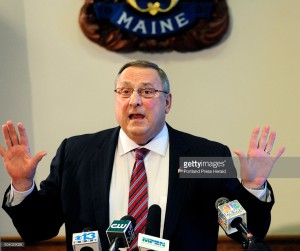 Paul LePage On His Town Hall Meetings, Politics, And His Relationship With The Press
by Adam Robinson

BANGOR, Maine, March 17 – The 74th Governor of Maine, Paul LePage, is one of the more controversial and outspoken governors in the United States. News outlets such as the New York Times, Huffington Post, and the Bangor Daily News, have all published pieces on LePage. Whether it’s remarks made about black drug dealers in Maine, policies he wants implemented like a lower income tax or just politically incorrect statements like when he compared the IRS to the Holocaust, the outlandish governor is here to get his word out.

“I just want to go up and tell people what I think the truth is,” LePage said of his town hall meetings. Governor LePage has been holding what he calls town hall meetings all over Maine, with one of his most recent meetings on Jan. 26, at on Mat the Richard E. Dyke Center for Family Business at Husson University, where LePage graduated from in 1971.

“I want to have a town hall meeting in every town in the state of Maine if I can get around to it,” LePage said. “If I’m here long enough. We are going to keep doing town halls every week until election day because I want to go out and talk to anybody who wants to listen.”

LePage chose to hold a meeting at Husson because he wanted to communicate with Bangor residents directly, a group that LePage claims to have been less-than favorable in the polls over the years.

“It’s an area that has been good from a political standpoint, but the city of Bangor itself has been less than supportive,” LePage said. “I’ve never won the city.”
The ABC affiliate in Bangor, ABC 7, and the Fox affiliate, WFVX Fox 22, were the only two news outlets there to film the event. ABC 7 live-streamed the Husson town hall, crashing their website.

ABC 7’s Craig Colson was the host of the Husson town hall, asking questions of the governor and being the voice of the news station at the event.

“We had been talking to the Governor’s office since he came into office about doing something at some point,” Colson said. “When he was doing town halls, we thought, ‘Why don’t we televise one then?’”

LePage gave an opening statement about Maine and what he wants to do to help fix some of the problems in the state, then took questions from Colson. LePage was not aware of the questions prior to the question and answer session.

According to Colson, there was some controversy over the legitimacy of the showing.
“I wanted to make sure it was republicans, democrats, all different backgrounds. The governor’s office helped us. We actually got names through tax rolls, called them blindly and asked them if they wanted to come. I called some personally to make sure they weren’t just LePage supporters.”

Colson said that ABC7 and Fox 22 were the only news stations allowed to show the event, but did offer different news outlets a stream so they could record the meeting.
Similar to the way presidential candidates campaign in different states, LePage wants to get to as many towns as he can to spread his message to the people of Maine.

News outlets were not allowed to cover the event as it was ABC’s event, much like CNN cannot air a Fox News Presidential debate. This may be, in part, because of LePage’s growing, and very public, mistrust of the local media.

“I think there is a newspaper there that has been very anti-Lepage,” said LePage. “The newspapers, I know they don’t like me and I don’t like them, it’s all a matter of truth. They’re biased, they write one-sided no matter what. I don’t read them so it doesn’t affect me.”

LePage’s cautiousness when working with the local media stems from publications such as the Bangor Daily News and what the governor perceives as the publication’s political bias.

“Listen, people are never always right, no questions about it,” LePage said. “And I am not the dumbest person in the world and I’m certainly not the smartest. But in five years I’ve been governor, I can assure you that I have not been wrong 100-percent of the time. According to the Bangor Daily News, I’ve never been right about anything. That’s the reason I do town halls, so I can get my side of the story out, because it doesn’t get out there.”

While controversial statements made by the governor may seem normal now to the citizens of Maine, LePage has a reason for being so outlandish – to get his word to the people.

Trump, who is running for the Republican nomination in the upcoming presidential election, is known for saying some outrageous things that stir up controversy and conversation, such as saying he wants to ban Muslims from the United States. For LePage, this is exactly how to grab people’s attention.

“If you’re Donald Trump, you suck the air out of the room,” LePage said. “If you’re on the opposite side of the newspapers in the state of Maine, you have to be a Donald Trump. If I’m a John Baldacci, fine, because I’ll be in the newspaper every day and they’re going to love you. But if the newspaper doesn’t love you, you’ve gotta get free publicity. I’m also a firm believer that any publicity is better than no publicity.”

Trump gained LePage’s endorsement recently, a logical step given both are vocal in their beliefs, say what they believe and are not afraid of what is written about them in the press.

“If I’m politically correct, it won’t have the effect I want it to have,” LePage said, mirroring remarks Trump has said about his own campaigning style.

Putting his support fully behind Trump was not his first choice. The plan for LePage was actually to first back Chris Christie. But, once the New Jersey governor dropped out of the 2016 presidential race, LePage planned to back another US governor in Florida’s Jeb Bush. Right before LePage was going to call Bush, the announcement was made that Bush had dropped out of the race. So then, in LePage’s words, he had to “look at the field.”

“Rubio, in my mind, I have met him, I’ve talked to him, and I’m just not comfortable that he’s ready,” LePage said. “He’s the same age as Cruz, but I don’t think he’s as mature. He’s a great orator, but we already have a president who is a great orator. So, I don’t trust him.

“Ted Cruz is more mature and more advanced intellectually and career-wise. However, he is also a first-term senator and in his case, I don’t believe he qualifies to run for the presidency.”

There have been questions regarding Cruz’s American citizenship, having been born in Calgary, Canada. LePage believes that Cruz is not a “natural born citizen,” as the US Constitution reads.

“When I was at Husson, I met a Canadian lady and I married her,” LePage said. “We had two daughters, they were born in Perth-Andover, New Brunswick. They do not qualify to be natural born citizens, even though I am back in Maine. That’s the reason I do not support Cruz. I think he is lying to the American people. He is a constitutional attorney and has interrupted the constitution to fit his desires and his ambitions.”

“If you read the constitution, it very says you can only be president if you’re a natural born citizen.” LePage said. “His policies I agree with, for the most part, but I don’t believe he’s qualified.”

With Cruz out of the question, LePage fully backed Trump. The governor listed three reasons as to why he put his support behind Trump:

“One, he’s a brilliant man to fight what people say,” LePage said. “He’s got an ego? You’ve got it. He’s got a big ego. Everything is ‘I.’ Except that, if you look at his corporations, he’s got some of the most brilliant people running his companies. That tells me he knows the best people to do a job.”

Second was his business background, something that LePage preaches, himself.
His third point was Trump’s financial acumen.

“We have a 19-trillion-dollar debt, and he’s the only one of all the candidates that I believe can lower it,” LePage said.

Just as Trump has said outlandish, sometimes racist, statements while talking to the people and press, LePage is no different. Take his latest move to bring attention to people he claims to be “anti-business”

At his town hall meeting on March 10 in Bath, LePage unveiled three “wanted” posters targeting Ben Chin, Matt Schlobohm of the Maine AFL-CIO and Nick Bennett of the Natural Resources Council of Maine. LePage claimed all three were job killers and anti-business.

“Ben Chin and the other folks voted, supported or testified against pro-business bills… We wanted to lower the age of minors to work from 16 down to 14, so that a person could get a permit at fourteen and go to work at fifteen hours a week. He testified and killed that. I think that’s anti-business, and it’s anti-Maine.”

The next step in showcasing the “job killers” of Maine for LePage is possibly to make up a deck of cards.

“We call them job killers. We are going to continue doing that. In fact, now I’m considering putting out a deck of cards of 52 job-killing people in the state of Maine. I’m trying to say that Maine is a job-killing state, and I think that the job killers ought to go back home where they came from and let Mainers make their own decisions on whether or not they should have mining in Aroostook County.”

One thing LePage is not concerned about is your opinion of him.

“I think what has been written about me is what the press wants people to view me as,” LePage said. “And, my children, my family, my wife know me, who I am, and I’m comfortable with that. It doesn’t make any difference what other people do or think, the only thing that is important to me is as long as we live within my moral compass, and we do the things to the best of our ability, then that’s all that matters.”