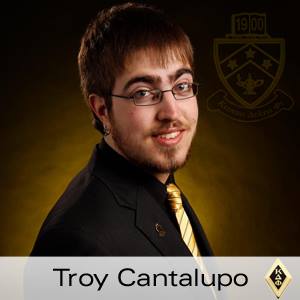 BANGOR- Nescom student Troy Cantalupo walked onto Husson’s campus in the fall of 2012 knowing little to nobody in the city of Bangor. He never could have expected what came of his time at Husson. After being somewhat of a hermit during his first couple weeks at Husson, he soon became an active member of the Husson community. Since attending Husson, Cantalupo has achieved many things, some of which include: becoming president of the national fraternity, Kappa Delta Phi (Lambda Chapter), giving back to the community, tutoring fellow audio students, and even doing an occasional tour for interested students.

“Things back home just seem to move a lot faster than up here in Maine. I think being in Bangor helped me to slow down a bit and enjoy the smaller things in life, instead of always running around, trying to prove something—a hallmark of the Massachusetts life, in my humble opinion.” Cantalupo shared of his transition to Husson.

It seems Cantalupo’s life is only going to speed up as he was recently hired on as a Engineering Technician at Noise Control Engineering, LLC in his hometown of Billerica. With that ahead of him Cantalupo’s fellow Kappa Brother, Mitch Cosgrove, shared how Troy has changed since being involved with Kappa Delta Phi. “During our three years in Kappa, Troy has learned how to be a leader, how to be a brother, and the meaning of Kappa. I personally thought Troy was a loser when I first met him. Now, he is my best friend, and excellent leader. An overall great person.”

But being the President of a national fraternity isn’t all smooth sailing, Cantalupo has described his experience as President as stressful, but rewarding. Being the president of an organization such as Kappa, according to Cantalupo, isn’t cut and dry leadership like you would think of a business leader, he’s had to accomplish a leadership role while still maintaining the personal relationship that he has with his brothers. A more personal relationship that bosses are often unable to have in the business world. In order to be a successful leader within a fraternity Cantalupo says, “you must drive the chapter as a group and not as an individual. You make decisions as a whole and you keep each other in check.”

Fellow brother Mitch Cosgrove describes Cantalupo’s leadership as fair, stating, “He is always listening to what the brothers, and the public have to say. He takes every bit of information and works to a mutual solution. If times of conflict arise he brings it up to the brothers. He understands that he may be the president, but a president is nothing without the brothers that support him.”

As the New England School of Communications at Husson has taught Cantalupo many basic communications skills, he also says that being the president of Kappa has improved his interpersonal skills considerably, making him a much more outgoing and confident person.

Although his fraternity has filled up a lot of his free time, Cantalupo has also managed to do a lot of work with the school itself, he’s worked at the Gracie and other studio’s doing maintenance work for the audio and live sound programs, which entails fixing broken equipment. He’s also managed to squeeze in doing tours for both potential Husson students as well as specific potential students who are interested in the audio program.

But there’s a side of Cantalupo than only a few have been able to experience, his best friend since freshman year, Jake Madore, shares what he was like before Kappa. “Troy has developed from being a soft spoken and shy young adult to a leader in the Greek Life community.” There seems to be a theme in Cantalupo’s development from a freshman to senior in college, as many have experienced.

As Cantalupo approaches graduation in May his brothers have a few ideas of what his future is going to look like. “I imagine Troy being very successful with his career. He has already accepted a job that pertains to his major that will make him very successful. I imagine he will be in a leadership position in whatever job he is in.” Cosgrove shared.

His brothers continue to show support for him as their chapter president. “Troy has proven himself to be a reliable brother who strives to strengthen anyone who calls upon him for help. As his brother and friend, I can honestly say that Troy has been there and coached me more times than I could honestly recount.” As this fraternity president continues on to bigger and better things it seems the impact that he made at Husson, and Husson made on him was extremely significant.

Like most seniors in college, Cantalupo is feeling both scared and excited as he’s about to start this new chapter of his life. Cantalupo has a few pieces of advice for incoming Husson students, “I encourage all current and new students alike to strive to be the best they can be at everything. To join clubs, to meet new people, to work on new hobbies, to learn as much as you can, and to get as much out of these four years as you possibly can. Most importantly, don’t ever let a challenge scare you away. Shoot for the stars, even if you think you might fall short. It worked for me, and I’m just some kid from Massachusetts who still has a hard time spelling Massachusetts.”