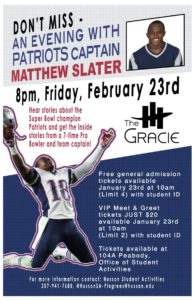 BANGOR, Maine – The New England Patriots clinched a berth in the Super Bowl with their win over the Jacksonville Jaguars last Sunday. Husson students will get the chance to hear about the game from someone playing in it: Patriots Captain Matthew Slater.

“We have not done anything like this before. We have had concerts and comedians but nothing like this,” said Husson Student Activities director Sterling Pingree. “It is a different look and it will be an unique and intimate experience for our students.”

The event will be held on Feb. 23 at 8 p.m. inside Husson’s Gracie Theatre. Each Husson student can get up to four free general admission tickets for the Q and A event. Husson students also can get two VIP tickets for $20. The VIP package includes a meet and greet, an autograph, and a photo before the event. The tickets are exclusive for Husson students said Pingree

Tickets for the event were released Tuesday morning. “We live in Maine, how often does this type of thing happen?” said Husson student and Patriots fan Tyler Hewey.

“[Student Activities] is willing to make Husson a great place,” said Husson sports journalism student Nick Langille. “They got someone who actually plays.”

“Someone has some strings,” said Hewey.

The tickets are exclusive to husson students but they can bring whoever they want with their tickets. “I’ve got some pretty excited friends,” said Langille.

Husson Student Activities annually host trips for Red Sox and Celtics games. This is the first time a Boston-area athlete has come to Husson as a free student activity event said Pingree.

The Slater event will take place 19 days after the Patriots participate in Super Bowl LII. The event worked with Slater’s schedule with the season over and Slater hanging around New England said Pingree.

The Patriots had to erase a 10 point deficit in the fourth quarter to reach their third Super Bowl in four years.

“Watching the [AFC Championship] game I was thinking about what the Pats not winning the game would do for the event. When they won the game I got that much more excited,” said Pingree.

General admission and VIP tickets are still available for Husson students in Peabody 104A. The tickets are expected to go fast because of the limited seating of the Gracie said Pingree. For more information you can contact Sterling Pingree at Pingrees@husson.edu.

The soon to be four time Super Bowl participant will have plenty to talk about said Pingree. “Hopefully this event means a lot to our students. Every Super Bowl has meaning and he will get a chance to share his stories with our students.”