BANGOR, Maine – Downtown Bangor might welcome the Urban Slide and Aeroballoon this Summer. Bangor’s Business & Economic Development Committee met with Downtown Bangor Coordinator Betsy Lundy on Tuesday. They discussed the costs to host these events, the impact on local businesses and restaurants, fundraising options, and the reasons for bringing these activities to Bangor.

Urban Slide is a 1,000 foot water slide used by cities and towns for tourism. According to the Downtown Bangor Partnership, they would like to have the slide on Park Street. Last Summer, construction via repaving the roads closed Park Street to 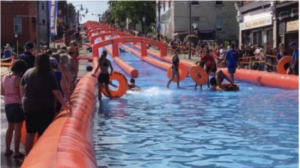 pedestrians. Downtown Bangor Partnership believes this event could bring in more revenue for businesses and restaurants. This event would be open to the public from Saturday into Sunday afternoon. A date has not been confirmed, but July 27th and July 28th are currently the top choices.

Gretchen Schaefer is a member of the Bangor City Council. She says the water slide could help Downtown Bangor prosper.

“If there’s something novel that will get people to downtown, say they do the slide, they get to the bottom and say ‘Oh, I want an iced coffee from The Grind House’, then you get people downtown with their money,” Schaefer says. “Any dollar that’s spent locally is used for the local economy.”

Aeroballoon is another event up for discussion. This is a helium balloon that carries people up and down in the air. The Downtown Bangor Partnership would like to host this event during mid-August into mid-October. However, no date has been decided yet. The Aeroballoon would allow attendees to oversee the city of Bangor from a sky view. Pickering Square has been chosen as the site for the Aeroballoon. This public space is known as the “bust hub”, which steers people away from visiting. 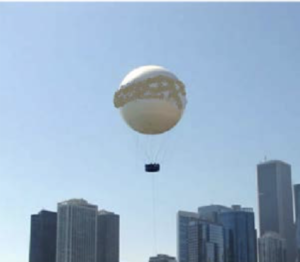 Schaefer believes adding this event might change the negative perception of Pickering Square.

“If you put an event there, it sort of chases the riff-raff out of that area a little bit,” Schaefer says.

Urban Slide and Aeroballoon have received mixed reviews from the public. The Unitarian Universalist Church believes the slide would make Sunday evening service inaccessible for guests. This slide would block the parking lot for churchgoers. Instead, they would have to walk up a hill, which could be difficult for the elderly. There’s another sign of concern with this event going all weekend. On the last Saturday of every month, the church hosts a bean supper for homeless people. However, they won’t have enough food to feed everyone, including the tourists.

Costs are another concern for some businesses and restaurants who are unsure of how much would they have to contribute to these events. This is a common question that comes to mind for stakeholders.

Some businesses like Wicked Brew Cafe & Coffee Shop approve of these events. They could promote their company and help people experience the downtown area. The decision has not been made yet, but the Downtown Bangor Partnership hopes to work out the specifics soon.