By Bryan Sidelinger- It’s a late night talk show just like any other- except it has a slightly lower budget, not quite as much national star power, it only airs once a week, and it’s taped right here in Bangor.

The Night Show, with Danny Cashman airs Friday nights on four different television stations around Maine, the most local being WABI TV5, here in Bangor. It has special ties to Husson University, as the show tapes Wednesday evenings at the Gracie Theater.

The show’s host is also it’s creator. Danny Cashman is an Old Town native, and started The Night Show in 1997 as a 19 year-old. Cashman sold, wrote, and booked guests for the show, which  ran on the WB affiliate and later Bangor’s UPN affiliate for five years. Cashman modeled the show after other national, late night talk shows of the time, hosted by the likes of  Johnny Carson and David Letterman. After five years, Cashman took a hiatus from the show to focus on other projects, including working as Assistant Press Secretary for then-Maine Governor John Baldacci. After leaving the governor’s office in 2009, Cashman started Cashman Communications, and returned as host of The Night Show in 2010, and has been there since.

The Night Show does indeed follow the “tried and true” late-night talk show formula. Cashman’s sidekick is Joe Kennedy, who plays Ed McMahon to Cashman’s Johnny Carson. Kennedy was the voice of UMaine hockey as the program’s public address announcer when the program was in it’s nationally relevant heyday in the mid to late 90’s. The show also has its own in-house band, Brian Nadeau & The Nite Show Band, playing a wide range of jazz, swing, pop and rock.

Cashman always knew from a young age that he wanted to do a talk show. In an interview with Shelby Hartin of the Bangor Daily News in 2015, Cashman admits to knowing the exact moment when David Letterman caught his eye, and he knew then that it was something he wanted to do when he got older.

““I don’t know why, but I was fascinated by it,” Cashman said. “I started watching him as much as I could at that young age. … It was shortly after I started watching Letterman when I said ‘I want to do that when I’m older.’”

The Night Show has guests, just as the more famous national shows do, most being local to Maine. Former Governor Paul LePage has been a regular, as has WVOM’s Ric Tyler. Cashman has also had Weird Al Yankovic and Detroit Red Wings goaltender Jimmy Howard.

The show has one other tie to Husson besides its use of the Gracie Theater; it also uses NESCOM students for all of it’s camera work.

Alyssa Thurlow, a reporter from WABI and a NESCOM graduate was on the show, said her alumni status at the school was a high point of being a guest on the show.

“The best part about it, honestly, was getting to see all the familiar faces of those who work behind the scenes,” she said. “It was cool to be on the show as a NESCOM grad talking about a station I now work for and grew up watching.” 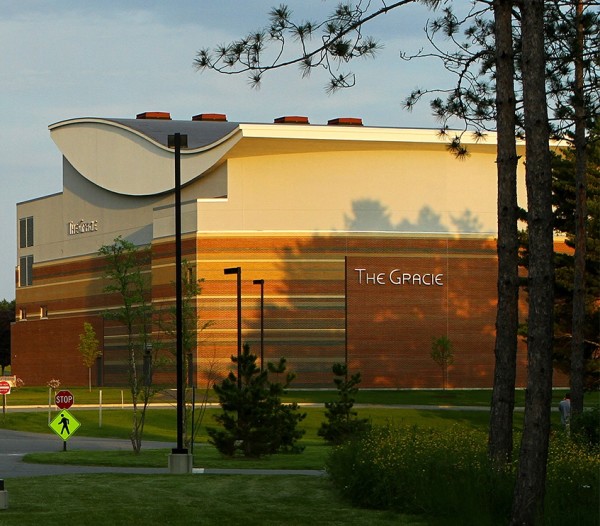 “The Night Show” tapes in front of a live studio audience at Husson’s Gracie Theater.

The show usually tapes Wednesdays at 6 p.m. Tickets are available on the show’s website.