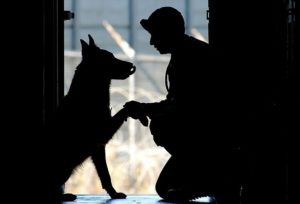 This past Sunday, March 31, Pets for Vets is a dodgeball tournament that is held at the University of Maine and helps raise money for veterans to get service animals, or be able to train their own animal to be a service animal. This event is in its fourth year, but this is its first time being help in the New Balance Field House at the University of Maine. This year UMaine had a great showing for the event. Different fraternities came out to support the event, and even professors played in the events with their students. This all added up to nearly 40 teams who signed up. The coast of this event was $5 a person, or $20 a team. The Maine Business School Corps helped run the event on Sunday. They helped deal with all the money raised and the paperwork that goes along with the tournament.

There was also a bake sale raising money for Salute of Service as well. The winners of the tournament won a giftcard to a restaurant of their choosing, from the list UMaine provided.

Post Traumatic Stress Disorder (PTSD) is “ is a psychiatric disorder that can occur in people who have experienced or witnessed a traumatic event such as a natural disaster, a serious accident, a terrorist act, war/combat, rape or other violent personal assault.” This is according to psychiatry.org.

PTSD can be triggered by loud noises such as a slamming door, fireworks, or a car crash. Some things that people don’t pay attention to that much, could very well be what triggers PTSD for these Veterans. The Veterans Association came out with a study that revealed about 22 veterans commit suicide each day. This means this is one veteran every 65 seconds. Service dogs can help prevent Veterans from these deep, dark thoughts.

Claire Jamieson, a student from the University of Maine who participated in the event was asked why she wanted to play in this tournament. “My marketing professor, Nory Jones (Who is the organizer of this event), told us about the dodgeball tournament in class and she even offered to pay for 4 teams.” Claire said. “I think service animals are great for veterans because I think it really helps them with PTSD. If veterans are dealing with problems, no matter what they are, I believe they should have a service animal to help in any way possible.”

“My Grandmother had a service dog, and it helped her out a lot,” said Danielle Healy, a participant in the event, “The dog would help her get around and make life easier for her.

Since it was a fundraiser for Veterans to get service dogs, there were veterans in attendance along with many service animals.