The Government Shutdown Is Over, But What’s the Way Forward? 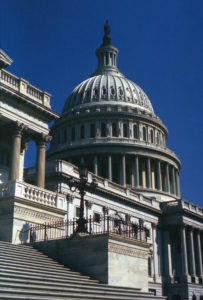 On the 1-year anniversary to the inauguration of President Donald Trump, the United States government was shut down following a series of disputes between Republicans and Democrats over what to do about CHIP (Children’s Insurance Program), DACA (Deferred Action for Childhood Arrivals), and other issues such as funding for Trump’s border wall.

The shutdown was brief, only lasting from Saturday the 20th to Monday the 22nd before Senate Majority Leader Mitch McConnell scheduled a vote on an emergency spending bill that would last until February 8th. This solution was brought about by a coalition of moderate senators from both sides of the aisle, led by Susan Collins (a Republican from Maine) and Joe Manchin (a Democrat from West Virginia), who worked together to craft a bill that pleased both McConnell and Minority Leader Chuck Schumer. Schumer agreed to the deal after McConnell reassured him that they would work out a deal for DACA by the February 8th deadline. The bill passed later that night by a vote of 81-18, and quickly passed the House before ending up on the President’s desk.

The deal was greeted largely positively, though the Democrats faced some criticism from their base for trusting McConnell without concrete assurance on DACA, with an op-ed in TIME going as far as to say that they “lost their spines” while another in Politico stated that they “lost the shutdown war”, but now further questions remain. Will a deal be made in time for the Dreamers, or will the American people be looking a whole new shutdown in a few weeks? What will the larger ramifications be? Of the two parties, who is truly responsible?

Hoping to answer at least some of these questions, Husson Professor David Haus weighed in. An Associate Professor of History with a PhD in Policy History, Haus is something of an expert on politics, and when asked about what he felt the ramifications would be, he knew an immediate answer: the government workers, who would feel the sting of the shutdown first.

“A lot of non-essential services would get shut down, and a lot of workers would get furloughed, and those services will not be administered,” He answered, in the midst of explaining exactly how the shutdown went down before explaining who blame could really be assigned to.

“I won’t assign blame to any party,” He explained, “but I will say both parties will work to assign blame to the other side, and ultimately the people who will decide are the voters, because this is a prelude to election season.”

By Haus’s logic, the election will be looming over the ensuing budget talks and generally everything that Congress does over the course of the rest of the year heading into the November midterms, but it could affect one person most of all: President Trump, who may find himself with an opposition Congress if the midterms go well for the Democrats, explaining that, “If he ran as someone who said, ‘I’m a deals man.’, then he needs to deliver on that.”

And as for the Schumer/McConnell deal, Haus isn’t sure where it’ll go, ultimately concluding that he doesn’t “think they’ll have a full bill,”  but thinks that, “they’ll find a way to pass a temporary funding bill that will tide them over until they get something that’s passable for the long-term.”

“I don’t think anyone wants a shutdown, and the closer you get to November, [the more embarrassing it will look]. And even if it’s February, it’s a short year. [laughs]”

For the full interview with Professor Haus, go here.