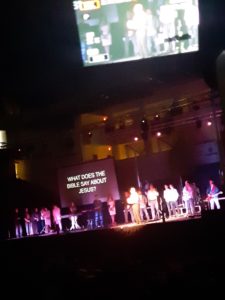 BANGOR, Maine – CrossPoint Church held their annual Easter service at the Cross Insurance Center. This was the first time their Easter service happened at the Cross Center. The church wanted a large venue for their three Sunday morning services and have room for guests as well. They encouraged people from Bangor and surrounding areas to attend this service.

Those in attendance received a card from door greeters. This card listed a five-digit number and read CROSSPOINTCH896 as well. During the sermon, people were asked to take out their phones. They entered the five-digit number into a text, followed by CROSSPOINTCH896. Then, a question popped up on a large projector on the stage at the Cross Insurance Center. The screen read, “Who is Jesus?” The audience responded with Love, Savior, Redeemer, Son of God, and much more.

Pastor Jerry Mick’s message was named after this question, Who Is Jesus? “We wanted to share 3 major things about Jesus we felt would be good for people to know,” Mick said. “First, what does history say about Jesus being a real person. Second, We wanted people to know what the Bible has to say who Jesus is, including his crucifixion. Last, we wanted people to know the resurrection was the crowning achievement of Jesus guaranteeing the world eternal life if they trust Him.”

He mentioned different stories throughout the bible of Jesus in action. Jesus was known for healing a lot of people, but Pastor Mick shared one miracle in particular. In Capernaum, Jesus was teaching a large group of people inside a house. Some men came with their paralyzed friend, but there was no room for them in the home. So, they placed their friend on a mat and lowered him through an opening in the roof. Once Jesus recognized their faith, he healed the paralyzed man.

The main focus of Pastor Mick’s message centered around the resurrection of Jesus Christ. “For believers there is no salvation without the resurrection. The entire Christian faith is predicated on this event. No resurrection, no faith or Christianity,” Mick said.

Chad Linnehan has been a member at CrossPoint Church for about four years. Linnehan helps teach the church’s college and career group on Sunday mornings. He continues to attend their Easter service year after year. “Easter to me is the most exciting Sunday of the year. It is the day that we celebrate that our God and Savior, Jesus Christ, did not just die for our sins, but rose from the grave,” Linnehan said.

Throughout the service, people were encouraged to join the worship team in songs of praise. Their theme was resurrection, which tied in nicely with the Easter holiday.

For some, when they think of Easter, the first thought that comes to mind is a bunny that carries around a basket full of eggs, which normally contains candy for children. For others, Easter represents the death and resurrection of Jesus Christ.

Pastor Mick hopes people enjoyed the service, but also learned something too.

“There is a God that loved them so much He came to earth to become a man, the God-man, so they might have eternal life,” Mick said. “Since Jesus did that it shows how much they are loved and valued.” 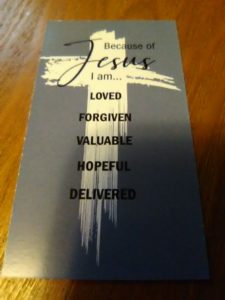 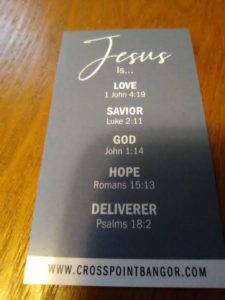 Student Government Executive Board Elections on the Horizon