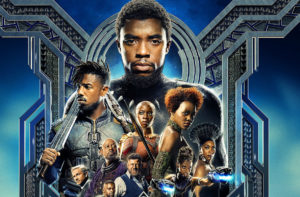 On Thursday, February 15th, Bangor Mall Cinemas held a special 7:00 PM showing of the latest entry into the Marvel Cinematic Universe, Black Panther. The first MCU film with a primarily black cast, Black Panther is one of the year’s most anticipated films, tracking to make at least $150 million in its opening weekend. It’s also become its most critically acclaimed, gaining a 98% “Certified Fresh” rating on review aggregator Rotten Tomatoes in a matter of hours after the end of it’s review embargo. This score places it as the best-reviewed film of the MCU, beating out last year’s Thor: Ragnarok by 5%.

But while critics are one thing, the fans are another. So the real question worth asking is what did the fans attending one of the cinemas now famous 7:00 PM blockbuster screenings think of the film? They loved it, of course. They laughed with the film’s jokes, gasped in awe at the film’s twists, and as always, waited through the credits to see what was in store for the franchise going forward. It was a fully packed cinema that applauded when the credits rolled, with some even standing to their feet and cheering.

After the credits rolled, the crowd shuffled out, with a few people standing in the lobby to discuss the film. One such conversation occurred between two young men, both college students, but with different experience with Marvel films. Levi Nash, a EMCC student majoring in Computer Systems Technology, and Patrick Welch, a Husson student majoring in Criminal Justice, were former classmates at Hampden Academy who decided to see the film together after a chance meeting while getting refreshments. After it ended, they sat down and discussed their takes on the film for a few minutes before having to head out, and they were generally positive.

“I thought it was a really good film,” Levi, a lifelong fan of Marvel comics, commented as Patrick, a follower largely of the films, nodded and murmured in agreement. “I thought the cultural aspects they touched on were really good, and they were ideas a lot of films really don’t touch on.” Patrick nodded, then added, “I wasn’t expecting it go down that road, and I was expecting more of a traditional superhero film. It really took it in a different angle.”

In terms of tradition, the duo’s comments strike a nerve thats resonated throughout Marvel’s “Phase 3” of their careful franchise plan. Following the ousting of Marvel CEO Ike Perlmutter (a staunch believer in “the formula” who fought against films like Black Panther and the upcoming Captain Marvel) from a direct role in producing the film, the MCU has taken a sharp turn for more genre-breaking takes on superheroes under the watch of Kevin Feige, who pushed for more diversity and autonomy for directors. And for the most part, it’s resonated with a series of critical and commercial hits following the shaky reception to Phase 2.

“I think [the different angle] worked really well to compliment the character because of his heritage and background, and if we hadn’t seen him in this role with this perspective, the film definitely would’ve lost something,” Patrick concluded, and Levi added a final note complimenting the film’s design choices as a mixture of “cultural aspects and futuristic designs.”

And ultimately, the choices of the film are what earns it the praise. When searching for a director, Feige made an active choice to seek a director of color who would “inspire the next generation the way we were inspired” and to give children of color “heroes to be inspired by”. By picking a black director, Feige gave the film an authenticity it would have lacked. For example, podcast host and music reviewer Andrew Levins praised the film’s period and location-accurate usage of rap music on his podcast Hey Fam!, going as far to say a white director “would’ve just used the Beastie Boys and called it a day.”

And by giving it that voice, maybe it will inspire a new generation the same way Wonder Woman inspired young girls after a glurge of white male heroes dominating the big screen while executives argued that “diversity doesn’t sell”. By giving those kids a hero they can identify with and root for, films like Black Panther could prove to be the spark that creates an inferno of talented, diverse new voices in filmmaking.