BANGOR, Maine – The Kappa Lambda sorority tradition continues with the 2019 Mr. Husson Pageant on Thursday night, April 18th, from eight to eleven in the Gracie Theatre on the campus of Husson University.

The six male students will be competing for three titles:

The money raised in the jars for “Mr. Cutie Pie” will go towards the sorority’s national philanthropy, The American Foundation for Suicide Prevention. 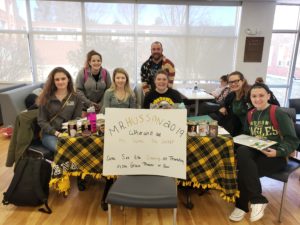 The money raised for A.F.S.P. goes towards training people about suicide prevention that will allow more people to be educated about its effects on people, their family, and their friends.

The five dollar charge for admission per person to the event will be used to fundraise for the chapter of the sorority at Husson itself.

There are three portions to the show; the interview portion, the talent portion, and the fashion portion.

“What makes this event so special is that it has been a tradition for so long,” said Kappa Lambda’s Social Chair and Historian, Justine Richardson. “It is special because of how the brothers and sisters come together to make such a great experience for the contestants, the audience, and themselves.”

Richardson went on to say how fun and entertaining the event is and that being the reason the event continues to this day.

“I also love seeing the passion that the contestants put into being involved in the performance,” said Richardson.

This event is special to Richardson because it gives her the opportunity to be a part of something bigger than herself. The part Richardson loves the most about Mr. Husson Pageant is the advertising.

“It has given me the opportunity to tell people about our national philanthropy,” Richardson said. “When I tell people that our philanthropy is the American Foundation for Suicide Prevention, they are more than happy to donate.” 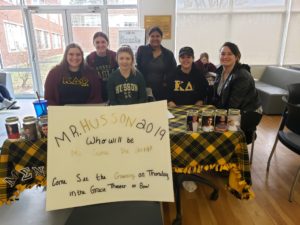 On behalf of her sisters and everyone else involved in the event, Richardson said, “We have worked very hard to put this event together and we hope that everyone in attendance enjoys the show just as much as we have enjoyed planning and preparing it.”

Richardson has been a sister in Kappa Delta Phi NAS, chapter Kappa Lambda since Fall 2017.  Her passion for the sorority has been a “growing flame” since she joined.

“My passion grows stronger with the more philanthropy we do for the community and for our national philanthropy,” Richardson said.

“My passion for Kappa drives me to be the best person I can possibly be.”

Next school semester, Richardson will be one of Kappa’s Co-Philanthropy Chairs along with another sister Kelsey Farr.

Kappa Delta Phi NAS (National Affiliated Sorority) is the national sorority name. Kappa Lambda is the specific chapter here at Husson University in which Justine Richardson and many others are apart of. There are other chapters across the nation.