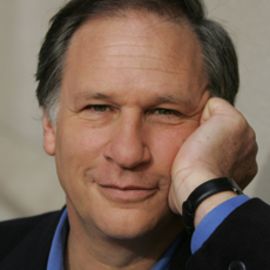 (Bangor, Maine) – On Saturday, March 17th, famed NPR radio journalist and co-host of Radiolab Robert Krulwich came to the Gracie Theatre as a headline event of the Maine Science Festival.

A 4-day celebration of all things science, the festival kicked off on Thursday, March 15th, and went until Sunday with a wide variety of events and plans. Krulwich, a veteran of the radio industry who has been working since the early 70s, was excited to speak to the audience about his experiences. After a glowing introduction from the hosts of the event, Krulwich was eager to launch into a variety of anecdotes and answers to questions that had been tweeted in from the audience, who had been informed beforehand of the “AskRobertMSF” hashtag.

Within seconds of taking the stage, the first thing Robert did was tell a self-deprecating story about speaking at public events.

“These hellos, when it’s a radio person, are a little bit confusing sometimes to people, because when you’re listening to somebody and you’re hearing the voice and you didn’t expect that body. That hair, that build, too big, too little,” he reflected to an outburst of laughter, “You get on stage, people murmur, and then everyone goes, ‘We’re sorry.’” The ice broken, Krulwich quickly launched into discussing his historic career and why he got started in radio.

Krulwich was often frustrated, as a visual learner, in his inability to keep up with his peers. From a frustrating chemistry test to dinners with his extended family, Robert often found himself “going dumb”. This guided him to believe that science should be explained to someone without terrifying them with “logic and reason”, boiled down to “biological recipes from hell”. “For most of the world,” explained Robert, pointing at a chart of the Krebs Cycle or, as he called it, “a recipe from hell”, “-if I walk into this chart, I’m never getting out.” Krulwich believes the easiest way to do is through “the power of pictures and metaphors.”

“If I go blind at equations, if I “go dumb”, what I do is find a smart person and ask if they can turn this into a picture or tell me a story, and if they can, what a difference that makes, because pictures give me my brain back.” To Krulwich, the inspiration for RadioLab stems from this belief that everything can be narrowed down to easy to understand “metaphors” so that no one ever has to “go dumb” when confronted with complex topics.

Of course, overuse of metaphors can be bad, which Krulwich showcased in the ill-advised science segment of the ABC Nightly News following the US liberation of Baghdad. Krulwich fought tooth and nail for the segment to be featured in spite of the much greater importance of the story of the hunt for dictator Saddam Hussein. In spite of a conflict with Peter Jennings, Krulwich “just put all his eggs into the metaphor basket” and was able to prevail in a moment he was “not too proud to show [the audience].”

True to form, the audience laughed uproariously as a segment talking about the camouflage ability of a species of octopus played. What was so funny? Simply the fact that Krulwich began the segment by saying, “Well, Saddam the dictator might want to be Saddam the octopus.” The audience had lost it by this point, and Krulwich quickly moved to wrap up his speech.

Following his conclusion, Krulwich took part in a brief Q and A, where he revealed that his prestigious career almost didn’t happen. In fact, he almost became a lawyer, had it not been for choice advice from his employer, who told him, bluntly, “I don’t think you’re the right kind of person for this business. (…)  Take a year and think about this business, because I think it’ll be the death of you. So take a year and surprise yourself.”

Krulwich was saddened by the advice, but he heeded it, and ended up choosing to go into radio. And now? “It astonishes me that I’m still employed. *laughs* It was touch and go at points. (…) In the end, I can’t think about something that I could’ve been, because I’m too grateful about the things I was.”