BANGOR, Maine – Husson University hosts a diverse population of students from abroad. Last April, international students performed an acclaimed variety show in Husson’s Gracie Theater, showcasing music, dance, clothing, poetry, and food from their home countries. The event, known as Culture Night, was well attended and gave American students a glimpse into the traditions of their classmates from outside the United States. Husson plans to host another Culture Night in April, but much planning still needs to be done. Preparations are underway for this year’s event, which will take place before the current spring semester ends.

It’s a major adjustment to move from Africa, Nepal, India, Latin America, Korea, or Europe to central Maine. There might be no more blaring way to experience culture shock than to move halfway around the globe and end up in Bangor. Yet for dozens of international students at Husson University, this major move is a reality. Students from abroad must adopt to the timely pace of life in the United States, American social norms that often differ vastly from their native nations, and foods that might be nothing like home. Maine winters are also a significant adjustment for students from warm climates. Outdoor temperatures at Husson tend to remain below freezing for weeks at a time in the winter months. 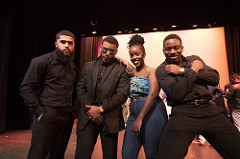 Despite all the differences from home, Husson is a second residence for a community of international students from all over the world. The university’s Director of International Initiatives Ryan Lemon works long hours to make it possible for foreign-born students to come to America and study at Husson. Lemon frequently travels abroad to promote Husson University to students in other countries. He recently returned from a business trip to India and Ski Lanka. As the first American that foreign students considering Husson meet, Lemon is the international face of the university.

A big part of Lemon’s job is speaking with U.S. customs and immigration officials as well as governments from student’s home countries. Significant paperwork and bureaucratic hurdles must be satisfied before young people obtain visas to study in the United States. Lemon collaborates with staff members at other colleges who serve his same role of recruiting foreign students. He participated in a conference call with his colleagues from other schools Tuesday morning, but it was not very beneficial.

“I didn’t learn anything I didn’t already know,” he said. “It is getting more and more difficult to bring international students to the United States with our current government. Many of the students who I am currently helping apply for visas will be denied. I think we’re going to see an overall reduction in the number of international students in America in the near future.”

Foreign students who apply for visas to study in the United States must complete an interview with the U.S. consulate in their native country. This step often prevents students from coming to America after significant time has already been invested in the process.

“[American] Immigration officers can spend two minutes interviewing a foreign student and decide not to approve his or her visa,” Lemon said.

One of the U.S. government’s main issues pertaining to student visas is how long students will remain in America after finishing their studies. Foreign students are supposed to return home upon graduating from American universities under the terms of most student visas, but this does not always occur. International students who graduate and stay in the United States against the conditions of their visas have made it more difficult for other students from abroad to study in America. Lemon says the current Republican-controlled executive branch of the U.S. government opposes the idea of foreign students staying here illegally when their visas expire.

Despite the hurdles involved in bringing foreign students to the America, Husson will celebrate its international student population with another Culture Night this spring. The event is a collaboration between the university’s African Student Organization and International Student Association. Last year’s event was a success for the greater Bangor area.

“It’s great not only for the campus, but the community,” Lemon said. “[American] Students who want to study abroad get a glimpse of different cultures and it peaks their interest as far as what they can do off this campus.”

Lemon says Husson’s Culture Night 2019 will stream online via Facebook Live for those who cannot attend in person. The event also may be broadcast on WHSN, the school’s radio station. An exact date has not been determined, but the special night will probably take place in April. Foreign students face a complicated process to get to America, but Culture Night lets them celebrate their continuing journey.