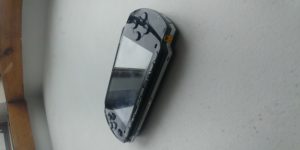 Bangor- As we edge towards a new generation in video game technology (more specifically VR), relics of times of yore are in increased demand and fetch higher prices. Waves of 80’s and 90’s kids reach their middle age and begin parenting the economy of nostalgia is on the rise. Handhelds and gaming systems that are often relinquished to the thrift store or landfill are seeing price hikes in the world of online selling.

Platforms like eBay are becoming a hotbed of buyers and sellers alike cashing in on the nostalgia train by dealing in old Game Boys, Super Nintendos, Segas, and Nintendo 64s. Systems that previously fetched less than a quarter of their original MSRP, can now be sold for just under their original asking price (depending on condition). Even handhelds like the Gameboy SP (original US release in 2004) that first sold in the US for $99.99, can make sellers as much as $110. Limited releases like the Spongebob edition have sold for over $300. eBay seller C. Cyr has joined the retro gaming sale trend by refurbishing and listing these relics of gaming history by becoming a regular thrifter.

“Stores like Salvation Army and Goodwill often have untested devices that are often in working condition, or only need minor repairs,” says Cyr.

One might find repairing electronics that are often nearly 15-20 years old a little daunting, but the simplicity of many of these devices means common hardware failures are well known and usually quick to remedy. Older Game Boys and consoles can often be brought back to near factory condition with a thorough cleaning, and minor soldering.

“I’ve been able to bring thrift store original Game Boys back to life by simply cleaning the circuit board with rubbing alcohol. I just sold a Sega Genesis for at least $10-$15 more just by thoroughly cleaning the outer case.” Cyr said.

It’s important to remember that any in-depth repair often involves opening the system’s case. This can void any warranty that may still cover the device, and minor mistakes can often be catastrophic to these aging devices.

“It can be pretty easy to accidentally ‘brick’ a device or even just damage original decals. Rubbing alcohol can be your best friend for cleaning, but some painted on decals can easily smudge off on contact. Hurting anything original can really affect the price.” Cyr explains

As gaming devices get more and more complex, newer systems can be near impossible for an amateur to repair. Cashing in on your childhood may be a hard choice for some, but you can’t scoff at turning childhood toys into adult cash. The nostalgia trend in contemporary pop culture has revitalized interest in the world of retro gaming systems and handhelds while putting a decent chunk of change in your pocket.