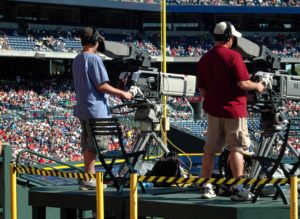 BANGOR, Maine- Before a home game at Husson University, the Sports Information Director, Sam Spargo, and her assistant, Thomas Branch, set up a camera on a tripod and hook up the camera to a Wirecast box that allows the broadcast to have a scoreboard. The whole set up is thanks to a couple of HDMI cords. There is a student that will work the scoreboard the whole game as they will be adjusting the time, the score, or strike and balls (when needed). Then comes in the play by play announcer as there has been at least a play by play announcer for every game except one so far this season.

“We have been lucky to have the technology to broadcast each home game,” said Husson Eagles Sports Network play by play announcer Cole Hurlbert. “I have watched a lot of road games involving Husson and some schools are just lucky to even have a video for the game; let alone an announcer.”

The New England School of Communications has partnered with Husson Athletics to broadcast two games this spring. The NESCom crew broadcasted a North Atlantic Conference doubleheader on April 6th as Husson baseball spilt with the Northern University at Lyndon. NESCom also plans to showcase a NAC game on Saturday, April 20th as the men’s lacrosse host Thomas College for senior day at Boucher Field.

“The baseball game was a really cool experience because I was able to have graphics on my screen and be able to see what the viewer saw which is unlike any normal HESN broadcast,” said Hurlbert. “The technology that NESCom has is just simply amazing.”

For the baseball game, there was a camera on the announcers, Brendan McGowan who was the play by play announcer, and Hurlbert who was the color commentator. Adam LaFleur was the sideline reporter for the game and was able to interview players after the game as he interviewed Conor Maguire. Interviews are something that would be unknown for HESN unless the players came up to where the camera was broadcasting the game.

There were also cameras; in center field, by the dugouts, in Husson’s dugout, and behind the plate.

“There was a lot of planning behind where the cameras should go. Normally for me, it didn’t matter as I wasn’t able to use the cameras to my advantage but for those games, I could. The camera in the center allowed me and Brendan to figure out what pitch was coming by the pitchers,” said Hurlbert.

“From my meetings with the production crew for Saturday. I believe there will cameras behind the nets, one in the middle, and one on each bench,” said Hurlbert.

“The baseball games were a cool experience for everybody. It would suck for the weather to ruin all the hard work by the production team,” said Hurlbert.

The final broadcasting decision for Saturday’s game will be made Friday night.