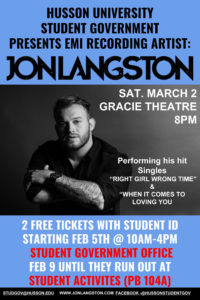 BANGOR, Maine — Country music star Jon Langston will be performing at Husson University on March 2. The event, which is put on by Student Activities, is at 8 p.m. in the Gracie Theatre.

Director of Student Activities Sterling Pingree is labeling the concert as Husson’s “main event of 2019.”

“This was actually a selection by Student Government, so it’s really a show that was selected by the students for the students.”

Langston has come on strong to the country music scene recently, coming out with his hit song “Right Girl Wrong Time” in 2017. His hit single “When It Comes To Loving You” was the second-best selling song of the week when it debuted in February of 2018 and reached the No. 29 spot on Hot Country Songs chart.

“The hope with an event like this is two-fold as far as what impact it can have on students,” said Pingree. You want students to feel like something important is happening, something that will get people talking and get them excited about being a member of the Husson community. With a show like Jon Langston, who is a very up and coming act, this is one that will undoubtedly be enjoyed in the moment, but you never know, Langston is touring with Luke Bryan this summer. In 10 years, he may very well be one of the biggest performers in country music and students will be able to say that they saw him at their school for free just because they were a Husson student.”

The doors will open at 7:30 p.m. and the show will begin at 8 p.m. It is a ticketed event, but the tickets are general admission so Pingree advises getting there early if people want to get the best seats. There will be an opening act, Joseph Gallant, who is a Maine native hailing from Scarborough, but now resides in Nashville. Gallant will go on at 8 p.m., with Langston and his band to follow.

“It’s just really cool that Husson puts on something like this,” said Husson Junior Aaron Boumil, who plans on attending the event. “Whether you’re a fan or not, it’s still hopefully going to be a fun experience.”

“Jon’s style is a very bluesy style of modern country that I think students will really enjoy,” said Pingree.

In the past, Husson has hosted many other “main events,” including a screening of The Fighter and followed with a live Q&A with Micky Ward. Other main-eventers have been Lee Brice, Tyler Farr, Craig Campbell, Canaan Smith and Drake White. Last year’s was Patriots captain Matthew Slater.