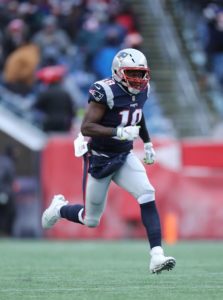 “We could sit here and say what if things were different? If he was in there what would have happened. I don’t know. Coach Belichick is always going to do what he believes is the best thing for the football team and what he believes will give the football team the best chance of winning. I am sitting there like you guys, like man, 21 [Butler] is right here. I did not know what was going on,” said Slater during the event. “It is hard to question a coach that has won five Super Bowls and won at the rate he has won.” 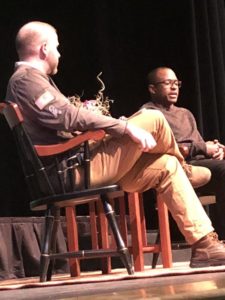 The seven-time special team pro-bowler was in good spirits during the meet and greet portion of the event.

“Thank you for coming our small school,” I said. “No problem thanks for having me,” said Slater.

It was Slater’s first time coming to Maine. “There is more reasons to come up now that I found out about Holy Donut. That is my all time favorite food group,” said Slater. “I had a donut bar at my wedding.”

Slater took photos and signed autographs to those students (including me) who purchased the VIP tickets. 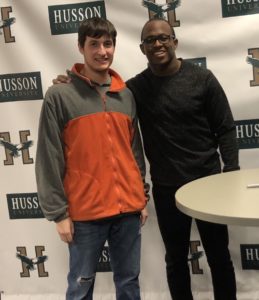 My picture with during the VIP event

During the Q and A portion of the event, Slater was welcomed by Husson Student Activity director Sterling Pingree to a standing ovation from those in attendance.

The Patriots captain also had a lot to say about the prior three Super Bowls he has been a part of.

The 2014 Super Bowl meant a lot to the team said Slater. “We wanted to be recognized as a good generation of players ourselves. There was a lot of desperation in [the locker room] and they were questioning whether the dynasty was over. I think we went in their playing with our hair on fire.”

The Patriots had lost two Super Bowls in 2011 and 2007 after winning three between 2001-2004. Malcolm Butler intercepted a Russell Wilson pass to seal the championship for the Patriots on the goal line with seconds remaining. “When I saw it live it took me awhile to process that he actually intercepted the ball. I was like, did he throw that? Did he intercept it? Oh wait we are going to win the Super Bowl,” said Slater. “It took me a while to process it, but that is something I will never forget.”

Two years later the Patriots erased a 25 point deficit to win their 5th Super Bowl.The Patriots trailed 21-3 at halftime. “It was surprisingly calm. We had been in those types of situations before,” said Slater. “We trusted our process and we trusted one another.”

As for next year, Slater said that the current group of guys have more to prove. “You have a lot of guys who still feel they have to prove themselves in that locker room. It remains to be seen what will happen with the draft but I think we have a good core of guys coming back,” said Slater.

He joked that he does not watch the draft. “All these guys are coming to take my job.”

Slater also spoke about the competitiveness of quarterback Tom Brady. “We play tiddlywinks in the locker room and this guy will be up their cussing you out if you beat him,” said Slater.

Slater’s father Jackie Slater is an NFL hall of famer. Jackie did not win a Super Bowl. Two-time Super Bowl champions Matthew Slater said,”I let him try [my rings] on.”

Matthew Slater was drafted by the New England Patriots in 2008. The Patriots moved up to draft Slater in the 5th round. He said that he had not even talked to the Patriots before the draft. “It was the first day with the team and coach Bill Belichick tells all the rookies ‘we don’t need any of you. We just went undefeated last year and you guys need to shut up and work hard and see if you can stick around here.’”

Husson plans on doing more of these events. “We will see if there is another opportunity to do something like this again and what that would look like,” said Pingree. “We certainly viewed this event as a success and all of the feedback has been very positive.”

This was the first event of the Q and A nature said Pingree when I talked to him following the ticket release.

After the event, Slater, who had was making coffee in Massachusetts earlier in the day, stayed to take photos and videos with other Husson students. “I’ve been blessed, I need to give back to the community,” said Slater.